Correcting Crooked Legs in the Foal - what can we do? A 'windswept' foal case

Why do foals become windswept?

This filly foal was born at 364 days gestation and had been very well 'cooked' by her dam. The foaling was uneventful but it became apparent that the filly had an angular limb deformity (ALD) or, in fact, two ALD's giving her a 'windswept' appearance. In this instance, a very large foal had been in residence in rather cramped quarters for a little too long and her positioning in utero had affected her limbs. The term 'windswept' is used because the foal's legs look as if they have been blown to the side by the wind. ALD's, which are described as 'varus' (medial or inward deviation) and 'valgus' (lateral or outward deviation) in foals are not uncommon and most will straighten with minimal intervention so don't panic if your much anticipated foal comes out a bit 'wonky'. BUT at the same time it is crucial that you are aware that you need to seek the advice of your veterinary professional promptly if you have ANY concerns about your foal's legs as the window of opportunity with regards to correcting some of these issues is really very small.

What treatment path can we take?

This foal's owner sought our advice within the first 24 hours of the foal's life and so an assessment and treatment plan was put into place immediately. Initially the foal was kept confined to a small yard (4m x 4m) and monitored. Within a week she had improved markedly but there was still an issue with one limb in particular as she was rolling her hoof mediolaterally when walking, causing the hock to 'bow' outwards. This deviation was unlikely to correct without intervention so it was decided that a shoe or extension should be attached to the foot. If the leg had not improved, xrays would have been taken to check for any bony abnormalities / collapse, which would have changed the treatment plan and prognosis.

A special plastic shoe with a lateral extension was fitted and glued on by the farrier when the foal was a week old and this was kept on for three weeks in total. In an ideal world, your vet and farrier has a communicative relationship to optimise your foal's chances of improvement.

What outcome / prognosis does this have?

The foal was re-assessed on a weekly basis by viewing when walked over a solid surface (the road). She remained in an enclosed area the entire time she was being treated and was gradually allowed more exercise but still in a limited area. Now the shoe is off and you would not even know that there had ever been an issue! There is no reason to believe this foal will not develop normally and have a fine athletic career. 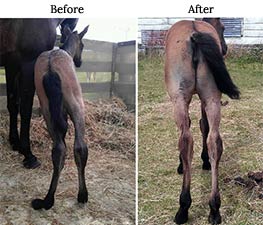